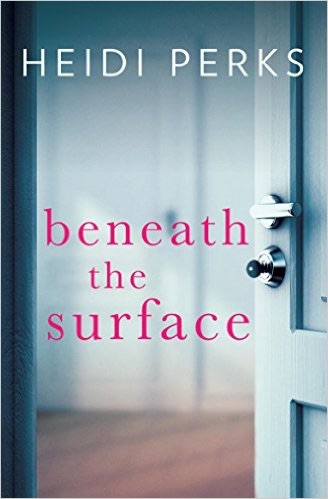 Every now in then a novel comes along and takes my breath away, and Beneath The Surface fits the Bill perfectly. It’s an emotionally charged thriller that kept me enthralled until the last page. It’s a story of Family, betrayal, secrets and manipulation.

Beneath The Surface opens with a hell of a tale, teenager Abigail Ryder arrives home from school one day to find her family gone. How could a mother leave her child? Or worse take two daughters with her and leave one behind? These were questions I kept asking myself throughout the book, which made for an intriguing and compelling read. Fast forward 14 years and we meet Kathryn the mother and her 16 year old twin daughters Hannah and Lauren,who are living in a small seaside town, at this point we are also introduced to the matriarch of the family Grandmother Eleanor who is now in a care home suffering with dementia. The story is told from three perspectives The mother, the twin sisters and Abi whose story is told in letters to her husband Adam, as suggested by her therapist. Through these letters the reader is drip fed snippets of the events leading up to Abi being abandoned, which make for a riveting read.

The characters could win an award for “the most dysfunctional family ever” a controlling and manipulative grandmother, a mother who suffers from a mental illness and an abandoned daughter. I found myself totally wrapped up in them, that doesn’t mean I particularly liked some of the characters, in fact I really disliked Eleanor and Kathryn. Eleanor came across as a narcissistic, controlling and a very manipulative mother and grandmother, where Kathryn appeared weak and shallow, controlled by an over domineering mothers mother who would do anything to please Eleanor even if it meant putting her own family second. As for Abi my heart ached for her, imagine being abandoned by your whole family? How would you feel? Her devastation and bewilderment at being abandoned was tangible throughout. Hannah and Lauren are very likeable characters and I felt such compassion for them, being bought up by an overbearing mother, who constantly puts them second in her bid to please Eleanor.

As Beneath The Surface unfolds, so do family secrets, secrets that shocked me to the core! I never seen them coming until they hit me in the face. Heidi Perks manages to keep the momentum going until the very last page, and I was so engrossed in it I struggled to put it down and read it in just over one sitting. This is the debut novel from Heidi Perks, which I find difficult to believe due to her delivering an exceptional novel, with multi dimensional characters, and an original and well thought out plot. I would not hesitate in buying the authors next book, and I will be recommending this book to everyone I know.

Many thanks to Heidi Perks for giving me the opportunity to read the ARC of What Lies Beneath in exchange for an honest review.

6 thoughts on “Beneath The Surface by Heidi Perks”