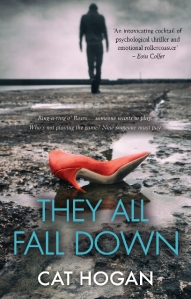 Jen Harper likes to play it safe. She is settling into life on the outskirts of a sleepy fishing village with her little boy, Danny. Life by the sea – just how she wanted it.

When she meets Andy, she feels the time has come to put her baggage and the scars of the past behind her. Then she is introduced to Scott, Andy’s best friend, and is stung by his obvious disdain for her. Why is Scott so protective of his best friend? What is the dark secret that threatens all of them?

In her attempt to find answers, Jen must confront her demons and push her relationships to their limits. By digging up the past, she puts Danny and herself in danger. Will she succeed in uncovering the truth before they all fall down?

They All Fall Down is the debut novel from Irish author Cat Hogan, it’s an intriguing tale of jealousy and obsession. Jen Harper feels like she is making a new start when she moves to a sleepy fishing village with her young son. It’s not long before she meets handsome local fisherman Andy, a man weighed down by his past. They appear to be the perfect match but unfortunately Andy’s best friend Scott feels very differently and it’s not long before things begin to take a dark and sinister turn.

Cat Hogan has created an eclectic mix characters, some of them were not particularly likeable to say the least, Self centred, flawed and destructive most of them appeared weak and shallow, but the characters flaws made this novel all the more fascinating, as friendships were broken and manipulated, and addictions took hold. Scott on the other hand was a very intriguing antagonist, chilling, manipulative, obsessive but very charming when he needed to be. They All Fall Down explores the flawed side of human nature jealousy, obsession and betrayal are all themes that run through this book.

I wouldn’t describe They All Fall Down as fast paced, this is one of those books where the tension slowly builds, the sense of foreboding I got throughout reading All Fall Down certainly added to the suspense. The second half picks up pace as Scott’s obsession becomes irrational, so much so you can sense the malice radiating from him. As the story reached its dramatic conclusion my sense of trepidation increased tenfold. I really liked Cat Hogan’s style of writing it’s clear and concise, which made it a quick read. Although it does have its moments – this isn’t an edge-of-your-seat hardcore thriller. If you read it with that expectation, you just might be a tad disappointed, on the other hand if you enjoy a psychological thriller that builds on the suspense then I would highly recommend They All Fall Down.

My thanks to the author Cat Hogan for an ARC in exchange for a honest review
Print Length: 207 pages

Blogger, reviewer, writer ~ So many books, so little time