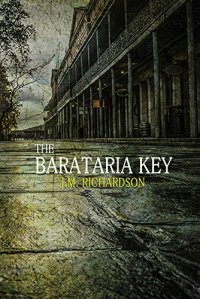 On my blog today,  I have a very interesting guest post about the publishing industry from author J.M. Richardson, he has recently published his second book in his James Beauregard series of books, ‘The Barataria Key‘.

The Publishing Industry: A Blood Sport

So you’ve written a book. Congratulations. No, seriously, that’s an amazing feat. A friend and fellow author by the name of Charles Benoit once told me that out of a thousand people who say, “one day I’m going to write a book”, one person actually does it. He also said that out of every thousand of the people who do write that book, one might actually get published. And then about one percent of those fiction authors actually get to make a living from it.

You key that final period on the final sentence of the final page of your manuscript, and bask in the pride that follows such an achievement. Then you have to go back and rewrite it. You have to review, edit, polish, and proof. Now you have a brilliant final draft, and are ready to share it with the world. Anyone who has ever stood at that threshold to the publishing world will tell you that they were not quite prepared for the anguish that would follow.

The classic approach to seeing your work in print is to find an agent. Most of the big publishers in New York and London won’t even look at a manuscript that came directly from the author. You haven’t been properly vetted. The gate keepers of the mainstream publishing industry are literary agents. There are thousands of agencies, some large and some small. They are highly selective of the clients they take on, so you have to impress them—really impress them. You have to stand out among thousands of requests they receive per week. You have to have just the right query letter and appeal to just the right agent, based on what genres they prefer. Only then, once you have obtained an agent, will your book have the chance of crossing the desk of an editor at a publishing company. Home free? Nope.
That editor still sees hundreds of manuscripts a week, most ending up in what’s called the “slush pile”. A great agent will help you avoid this, but the great agents are even harder to impress. Unfortunately, I know authors who have had two and three agents, and still no publishing contract. So as hard as it is to even get an agent, it’s even harder to have your work sold to a big publishing house.

The process is brutal. Here you are a new author with a brilliant piece of literature that you’re so proud of. You’ve raised and nurtured it from infancy. You’ve watched it grow into something beautiful. Now you have to query and wait—for weeks and months—only to be told they’re not interested. No one else seems to see the beauty in your writing. You begin to question how good it actually is. You mother told you it was amazing. So did your best friend from school. Wait, wait, wait. Rejection, rejection, rejection. Now you’re properly demoralized. You’re ready to scrap it; to quit. So now, new authors, I’ve ripped your heart from your chest and performed the first act in Riverdance upon it. Do not despair. It’s 2017!

I have four novels under my belt, all released by a traditional publisher with real professional editors and typesetters, and I don’t have an agent. I don’t have a big contract with Simon and Schuster. Technology has changed the publishing industry, in much of the same way that it changed the way we get our music or watch TV or movies. Five or six years ago, words like “Indie Publishing” or “Self-Pub” were dirty words in the industry. A lot of industry folks looked down their noses at this new section of the market. They saw people published outside of the big houses as hacks who couldn’t cut it the way authors have. But really, this has turned out to be a renaissance of sorts.

Granted, there are some self-published authors out there who are unleashing some pretty terrible writing on the world. That lack of vetting and editing tarnished the reputations of up-and-coming authors such as myself in the beginning. But there were and still are a great number of authors offering wonderful works of literature, and they’re bypassing the industry giants. The invention of the e-reader and the e-book have inspired hundreds of small, traditional, royalties-paying publishing houses to whom you can submit your stuff, free of having to first impress an agent. You still have to impress the editors at the publishing company, but with so many to choose from, if your work is good, someone will give you a chance. No longer do small houses and independent publishing get snubbed. Many are being highly commended and critically acclaimed. In a world when even major celebrity musicians and comedians have begun releasing material directly through iTunes and other independent outlets, artists are no longer under the boot of industry titans. Your work may flourish. It’s still a lot of work getting new readers and building a brand. But if you really want to be an author, this is all worth it. Happy writing, my friends. Good luck.

It lurks in the shadowy recesses of the French Quarter, among the flickering gas lanterns and Creole courtyards. In the humid, teeming swamps of Barataria. A dark secret. An ancient force. The will to remake one’s history. James Beauregard finds himself at the center of an insidious conspiracy, two hundred years in the making. From the backstreets of New Orleans to the once pirate-infested waters of the Gulf Coast, the race begins to unravel the mystery of The Barataria Key.

J. M. Richardson was raised in the small town of Franklinton in southeastern Louisiana. His upbringing was one of close-knit family and community. He attended Bowling Green School, a small K-12 private school. In his early years, Richardson nurtured an interest in the arts, history, geography, writing poetry, writing competitively, and developing talents in vocals, guitar, and musical arrangement.

In 1998, he graduated from high school and enrolled in Louisiana State University, where he began course work toward a degree in secondary education with a concentration in social studies. He joined the Pi Kappa Alpha Fraternity and took many courses in composition, history, sociology, and other forms of social sciences before graduating in 2003.

Richardson immediately began teaching history and sociology in Baton Rouge, LA high schools. In 2005, he married his college sweetheart, Melissa Ware, a literature major and native of Baton Rouge. They moved to the Fort Worth, TX area largely to be closer to Melissa’s ALS-stricken mother and for better economic conditions. Richardson began teaching in Keller, TX where they still reside today raising their two daughters Audrey and Elle. He still teaches in Keller where he writes his novels and enjoys the love and support of his wife and family.

2 thoughts on “**Guest Post** by J.M. Richardson author Of The Barataria Key @JMRichardson1”