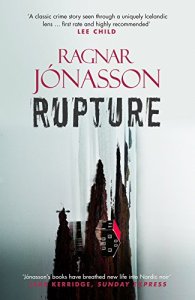 1955. Two young couples move to the uninhabited, isolated fjord of Hedinsfjörður. Their stay ends abruptly when one of the women meets her death in mysterious circumstances. The case is never solved. Fifty years later an old photograph comes to light, and it becomes clear that the couples may not have been alone on the fjord after all…

In nearby Siglufjörður, young policeman Ari Thór tries to piece together what really happened that fateful night, in a town where no one wants to know, where secrets are a way of life. He’s assisted by Ísrún, a news reporter in Reykjavik, who is investigating an increasingly chilling case of her own. Things take a sinister turn when a child goes missing in broad daylight. With a stalker on the loose, and the town of Siglufjörður in quarantine, the past might just come back to haunt them.

Rupture by Ragnar Jónasson is the fourth book in the Dark Iceland series and bad blogger that I am I have skipped two, not because I haven’t wanted to read them, it’s more to do with the fact that I have so many books on my TBR pile I just haven’t had the time, but when I received a very special hardback signed edition in a competition over at http://bluebookballoon.blogspot.com
I just had to bump this one to the top of my TBR pile and I’m so glad I did.

Rupture is a crime thriller that feels like a breath of fresh air, it has much more to offer than the average crime thriller, for me this novel is beautifully written with a well crafted plot, this is Nordic crime noir at it’s best. I’m normally a reader who loves a crime read to be fast paced, which I don’t consider Rupture to be, but what I loved about this novel was the authors incredible gift of being able to pull the reader into his plot and build on the suspense and mystery leaving me eager to read more. Sometimes I struggle with novels that have been translated as the writing can feel stilted or the heart of the story gets lost in translation, but Rupture proves that it can be done successfully, in fact I found it difficult to believe this book was written in anything but English.

Ragnar Jónasson’s writing is beautifully descriptive, he describes the town of Siglufjöróur in great detail, so it’s easy to imagine the bleakness and claustrophobic atmosphere that surrounds the small Icelandic town, as the town is quarantined from a deadly virus, the sense of unease and isolation are palatable. Ari Thór is asked to investigate a suspected murder from the 1950’s, and with the town in quarantine he finds himself with plenty of time on his hands, and as he begins to investigate the case it soon becomes clear that not everything is as it seems. The author intricately adds various plots to the story, but in doing so he adds layer upon layer of mystery to the story which kept me captivated to the last page. Despite the numerous threads the author expertly weaves them into an absorbing and suspense filled plot.

The author even manages to make his characters multi dimensional and complex, so much so you can’t help but feel a connection to them, I especially liked Ari Thor whose life doesn’t appear to run to plan, but never the less he’s a very intriguing character. There are no shocking or fast paced scenes in Rupture, but the author expertly builds on the atmosphere with every sentence he writes whilst maintaining the suspense and mystery. Rupture reads like a classic who dunnit, but that’s a good thing in my opinion and one of the things that make Rupture standout from other crime thriller reads. For me Rupture is refreshingly different amid all the crime thrillers on the market, beautifully and eloquently written it conjures up breathtaking images of a stark landscape that beg to be visited. Chilling, complex and addictive I would highly recommend Rupture to anyone looking for a unique crime thriller.

My thanks to Karen at Orenda books, David at BlueBookBalloon and Ragnar Jónasson for my treasured signed hardback of Rupture. 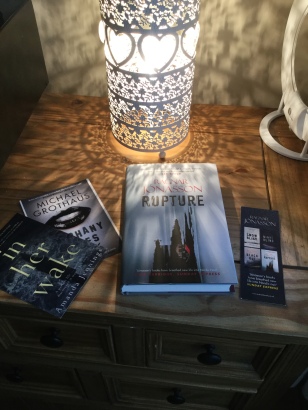