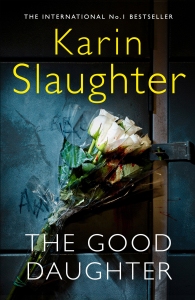 Today I’m thrilled to be on the blog tour for The Good Daughter by Karin Slaughter. I’ve always been a huge fan of this author so I literally jumped at the chance to take part in the blog tour. I never imagined when I started up my blog I would be helping to promote the book of one of the most famous crime thriller authors on the planet, so excuse me while I jump up and down with excitement!

Not only am I sharing my review for this gripping book, but I also have an author Q & A with Karin Slaughter, so without further ado………..

You write about crimes, particularly those violent crimes against women, that are sadly all too common, but was The Good Daughter based on any specific incidents? If so, do you find that difficult to deal with?

I’m always conscious when I write about crime that this sort of thing is happening everywhere in the world, multiple times a day. Especially when you’re talking about crimes against women. The Centers for Disease control tracks the leading causes of death for all Americans and publishes their report annually. For female infants, the number one cause of death is homicide. For pregnant women, the number one cause of death is homicide. From the ages of zero to 45, you can scan the top five reasons for premature death of women and find the word “homicide” listed. So, statistically, it’s an inherently dangerous thing to be a woman. In fact, almost every act of violence that’s not gang-related generally victimizes a woman, either obliquely or directly. Even terrorist attacks like the horrible bombing in Manchester victimized women. When we have random shooters here in the US, they tend to be angry young men who generally target women, or their first victim in a shooting spree is an ex girlfriend, a mothers, or a woman they think has rejected them.

So, to answer the question, the crimes in the Good Daughter are crimes that are taking place every second of the day, and I don’t find it difficult to write about them so much as feel the weight of that responsibility to hold a mirror up to society and say, “this is happening. What are we going to do about it?”

What’s the first ever story you remember writing?

I have one of only two existing copies: The Boom Diddy Kitty. It’s about a cat who helps a kid who is not very popular.

If you hadn’t become an author, what would you have wanted to do in life?

Being a writer is literally the only thing I’ve ever consistently wanted to do in life, from at least kindergarten. I always assumed you couldn’t make a living being a writer (and that’s true—I’m very aware of how fortunate I am) so I had back-up plans. I wanted to be a lawyer, I wanted to be a comic book illustrator, I wanted to be an astronaut…all the cool jobs. What I ended up doing was being an exterminator, then a house painter, then an employee at a sign shop, then a sign shop owner, then I got very lucky and the thing I had been toiling away at all along during my non-working-hours finally paid off and I got my first book deal. I am aware every single day that I am one of the luckiest folks on earth. Not many people do for a living exactly the job they have always wanted to do.

What’s the best thing about being a published author?

That’s honestly a hard question to answer. I get to work in my pajamas, but honestly, I wore my pajamas to work before and no one really noticed. I get to travel all over the world, which is nice because I’ve met all sorts of interesting people and that one mildy racist woman in Canberra. I love working with my editor because she really gets me. I love being able to write for a job. Maybe the coolest part is walking into a book store and seeing my books on the shelves, but not too many books because people have been reading them and the store needs to get more. That’s really one of the best things about being published—knowing my readers are out there and that they are happy with my books.

It’s certainly not being able to get an expired Nando’s card accepted for a free order of peri-peri chicken!

Karin Slaughter is the #1 internationally-bestselling author of more than a dozen novels, including the Will Trent and Grant County series and the instant New York Times bestsellers Cop Town and Pretty Girls. She has sold over 35 million books, making her one of the most popular crime writers today. She is passionate, no-nonsense, provocative, and is one of suspense fiction’s most articulate ambassadors. Her Will Trent Series, Grant County Series, and stand-alone novel Cop Town are all in development for film & television. She lives in Atlanta, Georgia. You can learn more about Karin Slaughter and her books over at…….www.karinslaughter.com

Twenty-eight years ago, Charlotte and Samantha Quinn’s happy smalltown family life was torn apart by a terrifying attack on their family home. It left their mother dead. It left their father – Pikeville’s notorious defence attorney – devastated. And it left the family fractured beyond repair, consumed by secrets from that terrible night.

Twenty-eight years later, and Charlie has followed in her father’s footsteps to become a lawyer herself – the archetypal good daughter. But when violence comes to Pikeville again – and a shocking tragedy leaves the whole town traumatised – Charlie is plunged into a nightmare. Not only is she the first witness on the scene, but it’s a case which can’t help triggering the terrible memories she’s spent so long trying to suppress. Because the shocking truth about the crime which destroyed her family nearly thirty years ago won’t stay buried for ever …

I’ve always been a huge fan of Karin Slaughter’s writing and have pretty much read every book she has ever written, so to say I was excited to see she was publishing a new novel was an understatement! The Good Daughter is a standalone, no sign of Will Trent here (I love this series by the way) and once again the author has shown why she is considered to be one of the world’s most popular and acclaimed storytellers. I was surprised to find The Good Daughter isn’t as fast paced or as graphic as the authors previous books, although some of the scenes and subject matter may not be to ever reader’s taste I must admit! After finishing The Good Daughter I definitely think this is the authors most ambitious and powerful book yet!

Like any book by this author there is plenty of mystery, terrible crimes are committed, but it also gives insight into family relationships when terrible things happen to them. Much of the book is about the horrifying events that happened to Charlie and her sister Samantha during their childhood , and how they are affecting their characters in the present and their relationships to each other and the people around them. I felt this novel was very much character led and the crimes almost felt secondary to the plot, that’s not a criticism by any means as The Good Daughter still made for a disturbing yet compelling read.

Karin Slaughter has created exceptionally complex characters, both sisters have their own demons that continue to haunt them, this novel is very much about the complexity of relationships and bad things happening to good people. Each character in The Good Daughter is garenteed to provoke a strong reactions, like anyone they have their strengths and weakness that make your own feelings towards each character sway constantly depending at what point you are in this throughly compelling read.

The author describes the small town of Pikeville so vividly it feels incredibly stifling, but also very typical, the kind of place where everyone knows you and your business, so it was intriguing to read how and why one sister choose to leave and the other one stayed, the reasons are complex but at the same time credible. Karen Slaughter never shies away from the darker side of life, in fact she hits it head on. The Good Daughter is dark, gritty and at times disturbing, with a superbly written plot, yet again the author has shown me why she continues to be one of my all time favourite authors on the planet.