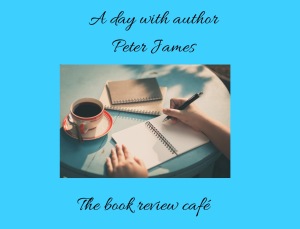 Today I’m thrilled, scrap that I’m over the moon to have international crime thriller writer, the one and only Peter James share a day in his life with the book review café. I know it’s going to sound cliched but I’m a huge fan of Peter James and have been ever since I read my first book in the Roy Grace series. The latest book in the series Need You Dead is out in paperback right now. So without further ado hands up who wants to read A day in the life of author Peter James? Well here you go……..

As a writer, the easiest thing is to not write! To make a cup coffee.. phone a friend… open the post…. surf the internet…..walk the dogs… But I think continuity is really important and that you only get that by maintaining a rhythm. I write six days a week and break on Sundays, unless I am bang up against a deadline, I try to keep Sundays free to relax, walk the dogs for a long walk with my wife, and catch up on emails. I set myself a daily writing target of 1000 words, and I always recommend to writers who ask me for advice to also set a minimum number of words to reach. It should be an attainable target, 250 words a day, 500, 1,000, whatever you can manage, so you feel a sense of satisfaction at reaching or exceeding it, but I think a routine is essential if you want to take writing seriously.

I have offices in my Sussex and Notting Hill homes, but I can write anywhere. Thanks to laptops, my office has long ceased to be a concrete space and I can write on the move. I actually write really well on airplanes, in the back of a car and in hotel rooms.

My whole day is back to front… It goes back to the time when I was writing novels, whilst working full time in film and television as a screen writer and producer, so I had to make my “Me time” to write. Although I am an early riser, my real writing day starts at 6pm in the evening, when I mix a large vodka martini, with four olives, put on some music, turn off the phones, ignore emails and get into a “zone” for the next three and a half hours. After that Lara and I relax in front of the TV. In the morning, I’m up early and we take the dogs out and feed all our menagerie of animals. I either swim or run for 30 minutes. After breakfast, I revise what I wrote the night before and plan the next pages, and in the afternoon I break, walk the dogs, go for a bike ride, or play tennis or catch up social media and emails. My least favourite part of my job is my vast email mountain!

I plan a book carefully, it is really the first 20% that I plan in detail, along with the ending, which I always know, to give me a “road map” and the three high points – but after that I like events to happen spontaneously, and for the story to start to take on a life of its own – that is when, for me, the real excitement starts. I believe that if, as a writer, you do not surprise yourself, you aren’t going to surprise your readers!

Your readers expect more from you than just a story with a beginning, middle and end, and interesting characters. They want to be thrilled, entertained, scared, perhaps, but they also want to learn from you. They want a little wisdom from you, insights into our world. So you must learn. I set myself a challenge of trying to learn something new every day. Ghandi said something I think is very beautiful and very true: “Live as if you were to die Tomorrow. Learn as if you were to live forever.”

I have a number of passions when I am not working, I love to read as much as possible, play tennis, run, swim, ski, cycle spend time with my wife, and race cars! It helps me to switch off on the motor racing circuit because I really have to concentrate. I race classic cars – currently a 1965 BMW, a 1958 Austin A35, a 1958 Fiat Abarth and a 1965 Mini. I have a huge passion for good food, good wine and good company!

I collect old gadgets and smoking memorabilia, as well as wine and rare whiskies. I love animals, and we have a menagerie at home with dogs, alpacas, emus, ducks and hens. I love spending time with my animals. They’re a great “normaliser” after the dark stories I write. It is wonderfully therapeutic to hand-feed the alpacas and emus and stroke them. There is something amazing about the simplicity of the lives of animals. A reminder to us all of the magical world of nature and a great respite of the darkness that is out there in the world so often.

Peter James is an international bestselling thriller writer. He is a New York Times bestseller, as well as having 11 consecutive Sunday Times No 1s, and he is published in 37 languages. His DS Roy Grace crime novels have sold 18 million copies worldwide. Prior to becoming a full-time author, he was responsible for 25 movies. In 1994 Penguin published his novel, ‘Host’, on two floppy discs as the world’s first electronic novel. His novels have won numerous awards, most recently the coveted 2016 CWA Diamond Dagger for sustained excellence, and he was publicly voted by WH Smith – Britain’s biggest book selling chain – The Best Crime Author Of All Time. Visit Peter James on YouTube: http://www.peterjames.com/youtube

My thanks to Peter James for his fabulous post.

You can learn more about the authors books here….Peter James author page Amazon