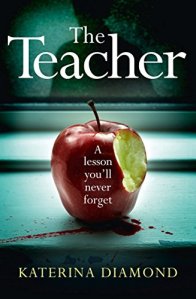 The body of the head teacher of an exclusive Devon school is found hanging from the rafters in the assembly hall.

Hours earlier he’d received a package, and only he could understand the silent message it conveyed. It meant the end.

But as they’re drawn into a network of corruption, lies and exploitation, every step brings them closer to grim secrets hidden at the heart of their community.

And once they learn what’s motivating this killer, will they truly want to stop him?

I must be one of the few book bloggers on the planet who hasn’t read The Teacher by Katerina Diamond, but I’ve finally rectified that. Prior to publication of The Teacher, I remember there was a lot of hype on social media regarding this book, add to that a tag line definitely “not for the faint-hearted hearted” and you would think I would have bought it straight away but no me being me I decided to wait until all the hype had died (excuse the pun!) down, also with a huge TBR pile I just never found the time I’m afraid.

I really have mixed feelings about The Teacher it was a book I really enjoyed reading, but there was a small part of me that was expecting something far more gruesome, now this could be because I read such a large amount of crime books I’ve become accustomed to descriptions of murders that might turn other readers stomachs, but I really don’t think it was that disturbing or gruesome. On the other hand if you don’t like well described murder scenes this may not be the book for you I’m afraid.

To begin with I admit I found myself confused each chapter introduces new characters, so by the half way mark there were an array of characters that I found difficult to keep tabs on, but then it happened! The Teacher began to make sense and I realised just how clever the author had been, she set the scene and then cunningly bought all the characters together in a dark and troubling tale. From the title I pretty much had the plot worked out in my head, but rather like the book nothing was as it seemed and it wasn’t long before I realised I had been pretty much misdirected by the blurb.

The Teacher introduces a new partnership DS Imogen Grey and DS Adrian Miles, and I’m intrigued by the pair as I’ve come to expect in a crime thriller they both appear to be messed up, but I’m interested to see how there partnership will evolve over the series. The Teacher is very much about good V evil, I never expected to have any sympathy for a killer that could do such awful things to other people, but I did, as to the reasons why, well I’m not about to giveaway spoilers so you will just have to read the book and see.

Although I enjoyed The Teacher I did find it a slightly disappointing read, I think because of all the hype surrounding this book I expected something more, but in fairness that’s my problem and not the authors. I do think The Teacher was a great start to a new crime series, deliciously dark with an eclectic mix of characters and I will certainly read the next two books in the series at some point.

17 thoughts on “The Teacher by Katerina Diamond #Review”