After a much needed extended break the book review cafe is back. My first review is for a crime series that just happens to be one of my favourites, so I’m over the moon to be taking part in the blog tour for The Hangman’s Hold by Michael Wood. This was one of my most anticipated reads of 2018 as I’m a huge fan of the Matilda Darke series, did it live up to my expectations? Read on for my thoughts….. 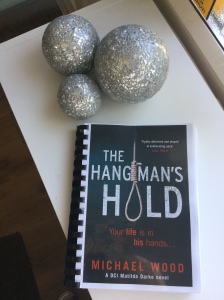 Your life is in his hands.

In the gripping new serial killer thriller from Michael Wood, Matilda Darke faces a vicious killer pursuing his own brand of lethal justice. Perfect for fans of Angela Marsons and Helen Fields.

There’s a killer in your house.

The Hangman waits in the darkness of your living room. As soon as you get home, he will kill you – hang you by the neck – and make you pay for all the crimes you have tried desperately to forget.

He knows your darkest secrets.

The police are running out of time. DCI Matilda Darke is facing her worst nightmare: a serial killer pursuing his own brand of lethal justice, whose campaign of violence is spreading fear throughout the city.

And he is closer than you think.

As the body count rises, Matilda is personally targeted and even her most trusted colleagues fall under suspicion. But can she keep those closest to her from harm? Or is it already too late?

OMG what a book The Hangman’s Hold turned out to be, this is one of my all time favourite crime procedure series, so I knew I was in for a thrilling read but Michael Wood has taken this brilliant series to a whole new level. It’s a shocker, brutal, dark and fabulously twisted in the best possible way. It’s not often when I finish a book I’m lost for words but I must admit I had to pick my jaw up off the floor and then re-read the last few chapters just to process what I was reading.  Michael Wood is a gifted story teller and deserves high praise indeed as this is definitely the best book in the series so far.  Although this book could easily be read as a standalone I would urge you to start at the beginning just because you are missing out on a “must read” series.

Matilda Darke is one of my favourite fictional Detectives the author has incorporated traits into her character that make her relatable to readers, as a Detective she’s confident, resourceful and determined but you also have a woman who is still grieving for her husband alongside the guilt she feels about a crime she was unable to solve, which makes her character vulnerable but at the same time far more likeable. Just as you think the author is going to bring some happiness into Matilda’s life things go down hill rapidly.  Matilda is targeted by the serial killer and things take a creepy and sinister turn, one that will make her question the loyalty of her own team.

A vigilante turned serial killer isn’t an original plot but Michael Wood puts his own unique spin on the subject and has written a story that’s gripping, fast paced with some real shockers hidden within the pages.  Now normally this type of serial killer would make me question the rights and wrongs of what they were doing, but not this one, he seems to relish what he’s doing (no spoiler here as the sex of the killer is in the book description), and there’s definitely more behind his motives but to what my lips are tightly sealed.  There are few scenes that some may find upsetting but they are paramount to the plot and aren’t to explicit.

The Hangman’s Hold is rife with tension, the author throws in plenty of red herrings to misdirect the reader and thus maintaining the suspense to the heart stopping conclusion. I definitely can’t wait for the next book in the series after Michael Wood left a clue to the subject of the next book. In my humble opinion The Hangman’s Hold is a dark and engrossing tale that any crime thriller will enjoy. Highly recommended.

This is going to come as no surprise but I’m giving  The Hangman’s Hold the very prestigious Gold Star Award Rating. It’s given to a book I feel is particularly outstanding, a book that covers every aspect of what I look for in a read, an original  plot, great characters and a storyline that draws me in from the first page and keeps me in its grips until I reached the very last page.

Michael Wood is a proofreader and former journalist from Sheffield, South Yorkshire. He is the author of the DCI Matilda Darke series set in Sheffield.

For Reasons Unknown was Michael Wood’s debut novel, which was published in 2015. Harper Collins published the second instalment, Outside Looking In 2016 and A Room Full Of Killers in 2017

Other books in the series 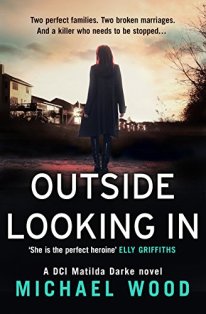 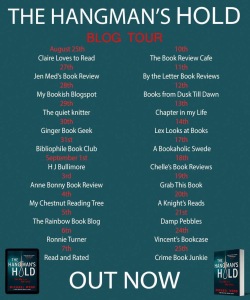