Today I’m thrilled to be sharing my review for In The Absence Of Miracles by M J Malone, a potential contender for my book of the year read on for my thoughts… 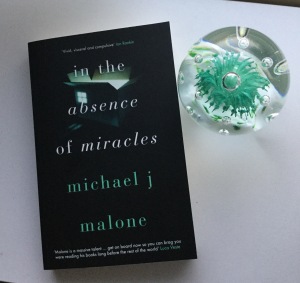 John Docherty’s mother has just been taken into a nursing home following a massive stroke and she’s unlikely to be able to live independently again.

With no other option than to sell the family home, John sets about packing up everything in the house. In sifting through the detritus of his family’s past he’s forced to revisit, and revise his childhood.

For in a box, in the attic, he finds undeniable truth that he had a brother who disappeared when he himself was only a toddler. A brother no one ever mentioned. A brother he knew absolutely nothing about. A discovery that sets John on a journey from which he may never recover.

Shocking, chilling and heartbreakingly emotive, In the Absence of Miracles is domestic noir at its most powerful, and a sensitively wrought portrait of a family whose shameful lies hide the very darkest of secrets.

There are books that are shocking and twisted, and then there’s In The Absence Of Miracles by Michael Malone! Shocking, doesn’t even come close to describing this remarkable book. This isn’t a book I feel fits into one particular genre, it’s part domestic noir, suspense, and crime thriller all rolled into one to create one of the most compelling, powerful and emotive reads I’ve had the pleasure to come across in the last few years.  This book reminds me of one of the author’s earlier books A Suitable Lie   that still remains one of my favourite reads. In The Absence Of Miracles is the heartbreaking story of one dysfunctional family, it’s a story that pulls no punches and one that will rip your heart out.

John Docherty’s mother suffered a massive stroke and is now receiving around the clock care in a nursing home. It’s left to John to clear the family home, buried among boxes he finds evidence that he has a brother, John has no memory of the brother and what follows is the story of John’s journey to discovering the truth. The truth will cause John heartbreak, pain, bewilderment and shame, as repressed memories from his childhood begin to emerge, he finds the truth is far more shocking than anything he could ever had imagined. Each page of this book crackles with emotion, it’s intense, dark, gritty and yet hidden amongst the pages are the fragile threads of hope.

The author has showed great sensitivity and understanding and in creating an all too believable character, John Docherty is one of those rare characters who consumed my every waking moment, he’s a man in turmoil, determined to self destruct, he’s  a man drowning in guilt, resentment and disgust. His story will grab at your heart and squeeze it so tight it might just explode. The author has created such an incredible character it’s impossible not to become consumed by his story, add to that the author’s extraordinary prose which describe John’s emotions perfectly I found my heart shattering into a million tiny pieces. I’m sure I felt every emotion John felt whilst reading this book. As John’s repressed memories began to surface and you see a man teetering on the brink, I wanted to tell him ‘everything would be alright’ but because of the nature of the book I wasn’t convinced there could be a ‘happy ending’.

I think the author has taken a brave decision, in writing a book that explores a taboo subject matter, that’s seldom discussed so fixed is the stigma attached to this subject. In some author’s hands this would have just made for a shocking read, but Malone strikes the right balance and has produced a masterpiece, it’s subtle, sensitivity written, wrought with emotion and has to be one of my most captivating, heartbreaking reads EVER! Michael Malone is one of those rare author who appears to be able to write in any genre and turn what could be an interesting read, into something extra special, definitely a book that will stay with me for a long time to come. In The Absence Of Miracles is certainly a contender for my book of the year and one I will be recommending to anybody and everybody

And yes in case you hadn’t already guessed I’m giving In The Absence Of Miracles my shiny Book hangover award, It’s given to a book I feel is particularly outstanding, a book that covers every aspect of what I look for in a read, an original  plot, great characters and a storyline that draws me in from the first page and keeps me in its grips until I reach the very last page.

My thanks to Karen Sullivan at Orenda Books for giving me the opportunity to read this fabulous book. I received this ARC in exchange for a honest and unbiased review. 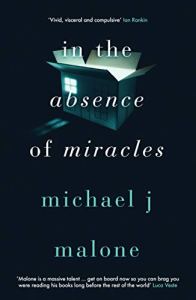