Today I’m thrilled to be opening the blog tour for Liar Liar by Mel Sherratt, alongside my partner in crime (excuse the pun!’) Kaisha, you can find her review at https://thewritinggarnet.wordpress.com/.

Liar Liar is published today so you don’t even have to wait to get your hands on a copy, just one click and it’s yours. Before I share my thoughts, here’s the book description….. 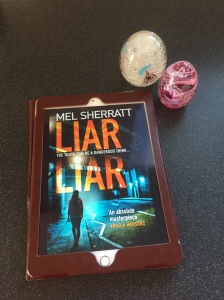 The truth can be a dangerous thing…

When a young boy falls from a balcony in a block of flats, DS Grace Allendale witnesses the shocking aftermath of the tragic event. But strangely, no one will admit to seeing anything – and the parents will only tell the police that it was an accident.

Determined to sort the truth from the lies, Grace is thrown into a case that takes her to the darkest corners of the criminal world – and strikes closer to home than she could have ever imagined…

Mel Sherratt’s back! with Liar Liar the third instalment in the DS Grace Allendale series. As the title suggests there are so many lies, and half truths buried within this story, Grace has her work cut out that’s for sure! The book opens with a shocking scene when a young boy called Tyler falls from a balcony in a block of flats. From the start of the investigation it’s apparent the boy’s parents are being evasive, their story doesn’t quite ring true, but why would they lie? Did Tyler fall over the railings? Or is there a far more sinister reason behind his accident? The author leads the reader a merry dance through a tangled web of lies and deceit. As I mentioned this is the third book in the series, however Liar Liar could be read as a standalone, although if you are anything like me I prefer to read books in order! It’s won’t be any hardship as it’s shaping up to be a cracking crime series.

For the residents of Harrison House there’s a familiar mantra around the investigation ‘I never saw nothing, ‘I never heard anything’ seems to be the favourite. Residents don’t trust the police, hell they don’t even trust their neighbours! Living day in, day out,  alongside crime, the residents have their own code, ‘you never tell the police anything’, after all no criminal wants to be labelled a ‘grass’! The book alternates between chapters that follow one of the main characters past, and the present day investigation, sometimes I find that dual time lines get over complicated, but that wasn’t the case with a Liar Liar, but it’s these past chapters that provide the reader with an insight into one of the characters, and their motivation for the choices they make.

Liar  Liar’s focus is set firmly On the back story of its characters, Grace has a much smaller part to play in this book, which worked really well, as the main plot wasn’t overshadowed by police procedures and the investigation. Thinking about it Liar Liar felt very different to the last two books in the series, but I mean that in a good way as it’s great to see an author not stick to a specific formula for each book. One of Mel Sherratt’s strengths is her capacity to delve into the darkest corner of the criminal world and create unlikable, violent and authentic ‘shady’ characters. The tension ramps up as the lies begin to unravel, and more crimes are committed. Liar Liar made for a gritty, hard-hitting read, and although I wouldn’t consider this a fast-paced read, there’s plenty to keep the crime lover eagerly turning the pages.

I live in Stoke-on-Trent, Staffordshire, with my husband and terrier, Dexter (named after the TV serial killer) and makes liberal use of my hometown as a backdrop for some of my books.

I’m not sure which I am most proud of – being on the list of Stoke-on-Trent’s top 100 most influential people 2018 or after years of rejection going on to sell over one million books.

I regularly appear at festivals, conferences and events across the country – my favourites being London Book Fair and Theakstons Old Peculiar Crime Writing Festival, Harrogate. 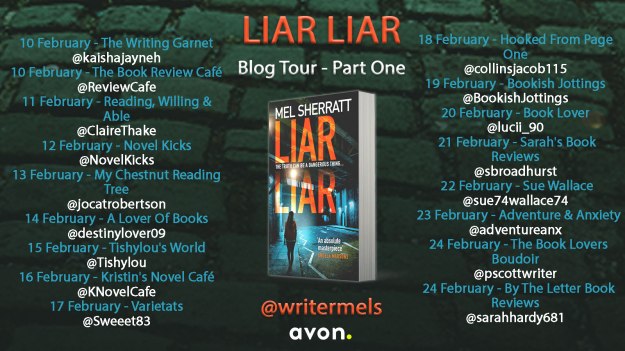 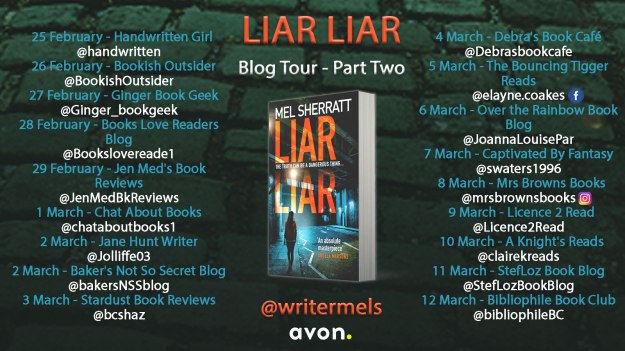 Leave a Reply to shelleyrae @ Book'd Out Cancel reply